Secretary General Office of the President Regional Administration and Local Government Engineer Joseph Nyamhanga has appointed China Henan International Corporation Group Co. Ltd (CHICO) who is building the Ngombe River Bridge in Sinza area to ensure that he completes the construction on time to alleviate the suffering of the people of the area

He issued the directive today while inspecting development projects being implemented by Kinondoni Municipal Council, Dar-es-salaam. 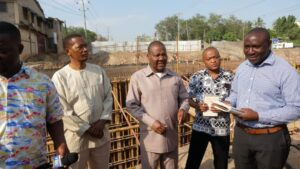 He explained that the benefits of building the bridge are to eliminate the problem of floods that were bothering the residents of the area and surrounding areas so its delay is causing great suffering to the people especially during the rainy season,

He further clarified that the project was supposed to be completed on September 16, 2020, so the contractor should step up to ensure that he completes it on time as the government will not hesitate to fine him for not completing the project on time.

He has instructed the Roads, Urban and Rural Agency (TARURA), Kinondoni Municipal Council, Dar-es-salaam Regional Commissioner to ensure that they closely monitor the project so that it can be completed on time to alleviate the suffering of the people around

“In order to reduce the inconvenience to the people, it is better for the contractors to make sure they complete the construction on time, I ask the Kinondoni Municipal Council to ensure they do not extend the time” stressed Engineer Nyamhanga

In addition. said the fifth phase Government under the leadership of the President of the United Republic of Tanzania Hon. John Pombe Magufuli has provided more than 731 billion shillings for infrastructure development in the City of Dar-Es-Salaam including markets, stormwater drainage and roads with the aim of improving the city

He explained that the project will have 15 pedestrian crossings where so far 7 ferries have been built and this project will cost more than 32.8 billion shillings where it will also build 2 dams in the area of ​​the brain water to take water before causing harm

In addition, the project will eliminate the problem of flooding for residents of more than 6 wards and 32 localities and also this project will have places that citizens will use for rest.

What Things Should Students Know Before Writing Their First Resume?