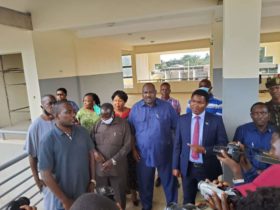 Jafo Give 17 days Morogoro Market to be completed

Uganda and Tanzania continue to be major tourist markets sources for Kenya after the USA according to the Tourism Sector Performance Report 2019. The
country received 245,437 tourists from America last year, the highest from one country, while Uganda and Tanzania were second and third with 223,010 and 193,740 respectively.

According to international tourist arrivals data from Kenya’s department of immigration and border management captured through the personal identification secure comparison and evaluation system, (the PISCES software), Rwandan visitors to
Kenya recorded the highest increase by 24.63 per cent, from 34,758 visitors in 2018 to 43,321 in 2019 Arrivals from Uganda are expected to increase
further this year following the introduction of Uganda Airline’s direct flight from Entebbe to Jomo Kenyatta International Airport (JKIA) in Nairobi and Moi International Airport (MIA) in Mombasa last year.

Mombasa doubles as a business and holiday destination for Uganda and the new air link is a boost to both.

“The security situation remained stable in the year with sustained investments by the government in a number of ca mpaigns to woo tourists paying off reads the report released last week.

Due to an increasing number of holiday makers, MIA registered the highest number of tourist arrivals with 8.56 per cent growth while JKIA recorded a 6.07 per cent increase. This is attributed to a rising number of direct flights such as Air France in March 2019. Major tourist markets for kenya

“After resuming flights between Paris and Nairobi in 2018, Air France increased its flights frequency from three to five weekly in March 2019. The French market has also seen growth as others like the UK decline” reads the report.