by Uniportal Tz
in Technology
0

The Realme GT Neo smartphone will launched officially in China on March 31. The company will be also set to announce V-series smartphone called the Realme V13 5G next to the Neo GT. A tipster from China has show live images of the V13 5G and key specifications

Realme V13 5G revealed that it is a 5G phone featuring a 90Hz display and come with long lasting battery with 5,000mAh capacity. And confirmed that the device will come with storage space up to 256 GB as shown in official poster of the Realme V13 5G. 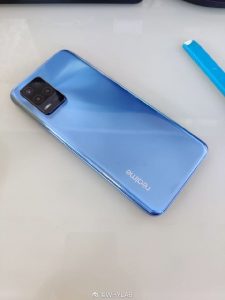 The poster also show the phone will be of two colours like Black and blue that  has equipped with a punch-hole display, a square-shaped camera module with 48-megapixel triple camera system and a side-mounted fingerprint reader. The screen size will be 6.52-inch screen. It will supports 18W fast charging. 8.4mm thick, with 8+128 and 8+256 memory versions

The information available show that a mobile phone can come with a starting price of 1,799 Yuan where is equal to $275