RITA reaches thousands of Mbagala Citizens. The Registration, Insolvency and Trusteeship Agency (RITA) has registered 12000 citizens and issued birth certificates to 2000 citizens who appeared at the ‘One Stop Answer’ forum coordinated by Temeke District Commissioner Godwin Gondwe’s office as part of the implementation of the President’s order. Dr. John Joseph Magufuli to urge his aides and public institutions to resolve the grievances and challenges of the people in their areas.

“Today is the last day for the residents of Mbagala Zakheem, from the 22nd we will be in the grounds of MwembeYanga Temeke, I urge the public to show up in large numbers to get birth certificates do not wait for events to start tracking these certificates that are currently used in various services including applying for passports. travel, national identity cards, loan application for higher education and health care students ”he explained. Acting Chief Trustee from RITA, Ms. Emmy Hudson

He also said that, RITA and other institutions have followed the people to solve their challenges, and that includes reducing the costs they spend in pursuing such services. 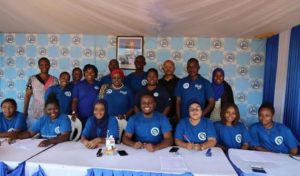 “We have moved to the areas of the people to solve the various challenges facing them, there are many institutions here… I want the people to come out in large numbers so that they can get education and various social services” he explained.

He also thanked the Temeke District Commissioner, Godwin Gondwe for coordinating the initiative which has shown positive results where in just one week the people have received services, education and solutions to their challenges.

In addition, the forum has involved various public institutions including NIDA, TANESCO, BRELA, TRA, LATRA and DAWASA and from the 22nd to the 28th these institutions will move their services in the grounds of MwembeYanga Temeke District.