He offered his congratulations today while speaking immediately after laying the foundation stone for the buildings and launching the launch of a program to award a degree in administration and management in Local Government Authorities, held at the Conference Hall, Hombolo in Dodoma.

Minister Jafo said the move was exemplary as it was the first college to take the initiative to build buildings using local revenue.

He has instructed all government colleges to emulate the system of the Local Government College who have used their local revenue to increase buildings in order to help students be in a better learning and teaching environment.

With him, Dr. Mpamila Madale Principal of the Local Government College said the presence of an increase in students has contributed to increasing local revenue which has led to improved infrastructure to meet the needs of the increase. 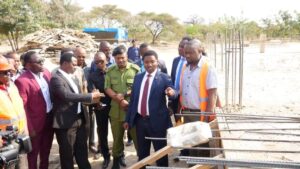 He went on to explain that the college has a strategy to build an administration building, building a building in the city branch to alleviate the suffering of paying for the cave they are currently facing where they have been paying 75 million shillings a year

In addition, he said for next season, the college expects to admit 7,000 students and has already started offering a degree in administration and management in local government.
Madale said they are currently in the process of developing a curriculum for the introduction of degree courses in administration and human resources, a degree in library and community development.

Earlier, the Property Manager, Engineer Frank Massawe said in the first phase they have managed to build one building with two staff houses where the college plan is to build 10 buildings using local revenue.